The kids are all right 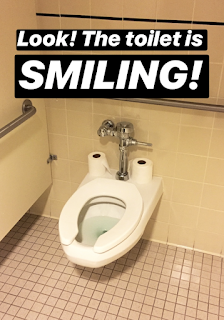 A few months ago, I had an opportunity to start a new stint at 720 California.

Much like the anticipation of seeing an old girlfriend, I wondered…would my cheeks remember the cool taste of 4thFloor Men’s Room porcelain? (Yes, sometimes I lift the seat and sit right on the rim; the heart wants what the heart wants.)

It was like riding a bike. A sweet, sweet bike…that gathers up all your fecal waste and spirits it away.

But I was also curious about my new poop-mates. In the time since I left, the denizens of 720 California had gotten younger and (ugh) healthier. I wondered if their impact on the facilities would be as, uh, dramatic as year’s past.

And at first, I was disappointed. My first months back, it appeared that millennial buttholes where, in fact, different. I assumed that all those years of having their butts wiped by mom and dad, well into their 20s, had turned their anus into a pristine field of dreams.

But then, in May, something happened. I walked in to 4thFloor Men’s Room and smelled something horrific—a good old-fashioned 720 California assault on the senses. And sure enough, a look into the Peter Brady stall (that’s the middle one, new readers) confirmed the crime. A Jackson Pollack-esque splatter that gave me HOPE.

In the subsequent months, my coworkers rallied like a team trying to make up a fourth quarter deficit. Stinks that should be labeled hate crimes. Full bowl blowouts. Under the seat danglers. Prolonged grunt sessions to get the devil out. In other words—the sites and sounds we have come to know and love from the 720 California men’s rooms.

This generation is gonna be just fine, you guys. And whether that’s because of the green juices or the kale or their knowledge that social security will be insolvent well before they retire, their gastrointestinal distress is on par with the GenXers and the Boomers before them.

Poop on, young friends. Poop on.

Sometimes you want to poop where everybody knows your name 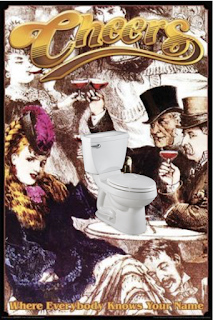 There's an old saying: "The heart knows when it's home."*

Well, so does the sphincter.

Yesterday, this veteran potty blogger took a seat on an old friend--the toilet in the penthouse stall in the 4th floor men's room at 720 California.

And just like how your pupils dilate when you see a loved one from your past, my body had a similar response to sitting on the familiar plastic. (And I'm not talking about my pupils. You know what I'm referring to, right?)

It was like now time at all had passed. The give (me) and take (toilet) was as enjoyable as every--like two childhood besties at a reunion, laughing, completing each other's sentences, and reconnecting after a prolonged separation.

What drew me back to my old stomping grounds? Nostalgia. Familiarity. Comfort. After all, just like that wise old TV-show taught us, "sometimes you want to poop where everybody knows your name."

Tomorrow is promised to no one, but I feel like there may be more opportunities for us to spend time together in the near future. I hope so. We have some catching up to do. And I'm anxious to learn how the men of 720 are treating my old pal. With the respect it deserves, I'm sure.

* Honestly, I have no idea whether this is an old saying or not. I made it up.
Posted by Potty Blogger at 7:15 AM 2 comments:

Did you leave your balls in the men’s room? 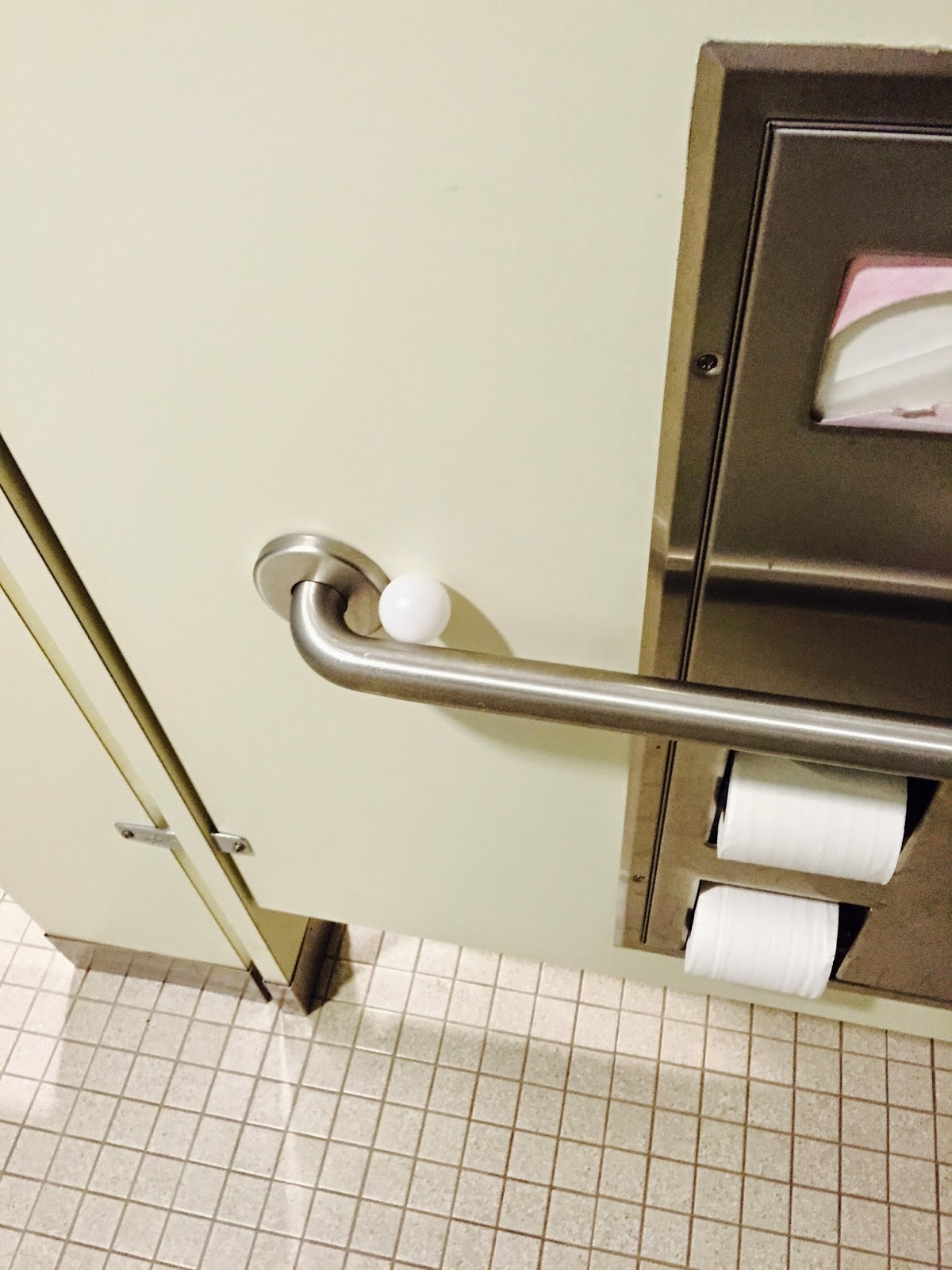 That is a ping-pong ball sitting up on the handicap rail of the penthouse stall.

First of all, this is INSANELY dangerous. Can you imagine the handi-abled gent who wheels into the stall and then tries to hoist himself onto the bowl using that rail and then his hand SLIPS on your carelessly-left-behind ping-pong ball?!? He could fall and paralyze himself! (If he’s not already paralyzed, of course.)

Second, which one of you ballers is carrying around your own ping-pong ball? And why?

Third, WHERE were you keeping that ball? Was it someplace where it needed to be removed before you could do your #2 business?

The lesson here: If you insist on keeping a ping-pong ball in your butt (no judgement) then please replace it before exiting the stall lest your double paralyze a co-worker.
Posted by Potty Blogger at 2:40 PM No comments:

Please don't wipe your butt with an old t-shirt 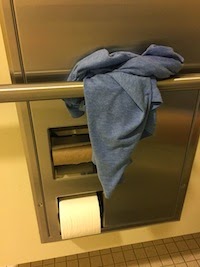 I wish I didn't have to write this, but evidence in the men's room this week suggests that it may be necessary.

If you are making a number two and there is no toilet paper but there IS an old t-shirt lying around, you MAY be tempted to use that old t-shirt to wipe your butt.

But think ahead, dear reader. Then what? What happens the second after you've cleaned yourself up? What do you DO with the t-shirt?

So, thanks, thoughtful-co-worker-who-left-his-old-t-shirt-draped-over-the-handicap-bar but I think we'll be just fine without your v-neck.
Posted by Potty Blogger at 1:25 PM 5 comments: 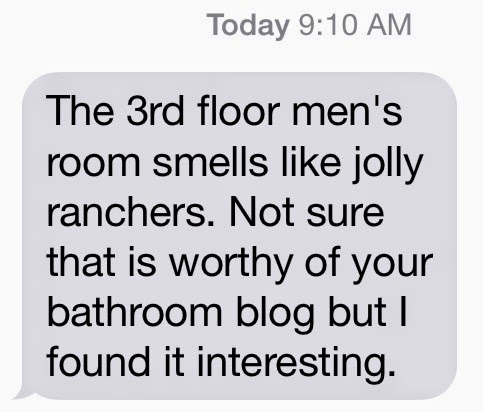 This tip came in this morning from a faithful reader. It feels like important news to report.

This is what the future is going to be like friends: a world where you can make your dumps smell like anything you want. That's a world I WANT to live in.

Not sure if it's a pill or an attachment or what that gives you this super power, but sign Potty Blogger up for your beta test, please.
Posted by Potty Blogger at 9:26 AM No comments:

Listen, this is a blog about toilets and bodily functions. We've seen some things. We've talked about stuff you probably wouldn't share at the dinner table. In fact, some days you can get a little jaded, thinking you've seen it all.

“Do I even have the capacity to be shocked anymore?” a potty blogger thinks to himself.

Yesterday, I stumbled across a crime scene so hard to explain that it immediately slapped me back to the “ olden days” of this blog. When coworkers seemed to go out of their way to find new and creative ways to soil the porcelain.

It was first floor men’s room. (Yes, the one that no longer says “men” on the outside of the door but, rather, sports a cheeky set of painted “two low balls” to indicate “this one is for the fellas.”)

I headed to the penthouse stall for a quiet sit when I pushed back the door and saw it.

“Is that a large, wet caterpillar that has just pushed out of its cocoon and crawled up on the seat?” is how my brain first tried to make sense of what it saw.

But it was no caterpillar.

Was it coworker’s silent protest? Or a cry for help?

Was it the rogue byproduct of an interviewee's nervous tummy?

And who, in god’s name, commits such a crime, stands, sees it and thinks, “Yeah, I’m just going to leave that there?”

Yes, I took a picture. (Mainly to confirm later that it was not some delirious fever dream, but that somebody actually left that baby on the shelf.) And the editorial staff here at 720-California-4th-floor-mens-room-dot-blogspot-dot-com debated long and hard about whether or not to include the photo along with this post.

But if we do that, the terrorist wins.

I don’t know who you are, first floor turd painter, but what you did was WRONG. This is not some art project and an office toilet seat is not a canvas for your fecal shenanigans.

Cut it out.
Posted by Potty Blogger at 10:04 AM No comments: 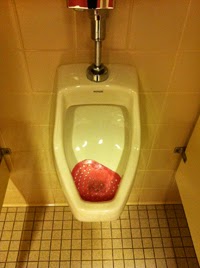 The mens rooms at 720 California are enjoying a sweet new smell this week. Cinnamon urinal cakes.

It's like peeing into a bowl of Red Hots! So satisfying.

But be careful, men. For those of you who are more generously endowed, don't let your equipment dip down and make contact. Nobody wants a stick of Big Red in their urethra. (Trust me on this one.)
Posted by Potty Blogger at 10:21 AM 2 comments:

Somebody has to write about this shit.